From Wikipedia, the free encyclopedia

listen)), historically Bjørgvin, is a city and municipality in Vestland county on the west coast of Norway. As of 2021, its population is roughly 285,900.[2] Bergen is the second-largest city in Norway. The municipality covers 465 square kilometres (180 sq mi) and is on the peninsula of Bergenshalvøyen. The city centre and northern neighbourhoods are on Byfjorden, ‘the city fjord’, and the city is surrounded by mountains; Bergen is known as the “city of seven mountains“. Many of the extra-municipal suburbs are on islands. Bergen is the administrative centre of Vestland county. The city consists of eight boroughs: Arna, Bergenhus, Fana, Fyllingsdalen, Laksevåg, Ytrebygda, Årstad, and Åsane.

Trading in Bergen may have started as early as the 1020s. According to tradition, the city was founded in 1070 by King Olav Kyrre and was named Bjørgvin, ‘the green meadow among the mountains’. It served as Norway’s capital in the 13th century, and from the end of the 13th century became a bureau city of the Hanseatic League. Until 1789, Bergen enjoyed exclusive rights to mediate trade between Northern Norway and abroad and it was the largest city in Norway until the 1830s when it was overtaken by the capital, Christiania (now known as Oslo). What remains of the quays, Bryggen, is a World Heritage Site. The city was hit by numerous fires over the years. The Bergen School of Meteorology was developed at the Geophysical Institute starting in 1917, the Norwegian School of Economics was founded in 1936, and the University of Bergen in 1946. From 1831 to 1972, Bergen was its own county. In 1972 the municipality absorbed four surrounding municipalities and became a part of Hordaland county.

The city is an international center for aquaculture, shipping, the offshore petroleum industry and subsea technology, and a national centre for higher education, media, tourism and finance. Bergen Port is Norway’s busiest in terms of both freight and passengers, with over 300 cruise ship calls a year bringing nearly a half a million passengers to Bergen,[3] a number that has doubled in 10 years.[4] Almost half of the passengers are German or British.[4] The city’s main football team is SK Brann and a unique tradition of the city is the buekorps. Natives speak a distinct dialect, known as Bergensk. The city features Bergen Airport, Flesland and Bergen Light Rail, and is the terminus of the Bergen Line. Four large bridges connect Bergen to its suburban municipalities.

Bergen has a mild winter climate, though with a lot of precipitation. From December to March, Bergen can, in rare cases, be up to 20 °C warmer than Oslo, even though both cities are at about 60° North. The Gulf Stream keeps the sea relatively warm, considering the latitude, and the mountains protect the city from cold winds from the north, north-east and east.

The city of Bergen was traditionally thought to have been founded by king Olav Kyrre, son of Harald Hardråde in 1070AD,[6] four years after the Viking Age in England ended with the Battle of Stamford Bridge. Modern research has, however, discovered that a trading settlement had already been established in the 1020s or 1030s.[7]

Bergen gradually assumed the function of capital of Norway in the early 13th century, as the first city where a rudimentary central administration was established. The city’s cathedral was the site of the first royal coronation in Norway in the 1150s, and continued to host royal coronations throughout the 13th century. Bergenhus fortress dates from the 1240s and guards the entrance to the harbour in Bergen. The functions of the capital city were lost to Oslo during the reign of King Haakon V (1299–1319).

In the middle of the 14th century, North German merchants, who had already been present in substantial numbers since the 13th century, founded one of the four Kontore of the Hanseatic League at Bryggen in Bergen. The principal export traded from Bergen was dried cod from the northern Norwegian coast,[8] which started around 1100. The city was granted a monopoly for trade from the north of Norway by King Håkon Håkonsson (1217–1263).[9] Stockfish was the main reason that the city became one of North Europe’s largest centres for trade.[9] By the late 14th century, Bergen had established itself as the centre of the trade in Norway.[10] The Hanseatic merchants lived in their own separate quarter of the town, where Middle Low German was used, enjoying exclusive rights to trade with the northern fishermen who each summer sailed to Bergen.[11] The Hansa community resented Scottish merchants who settled in Bergen, and on 9 November 1523 several Scottish households were targeted by German residents.[12] Today, Bergen’s old quayside, Bryggen, is on UNESCO‘s list of World Heritage Sites.[13]

An historic photochrom of Bergen near the end of the 19th century. Visible are Bergen Cathedral (Domkirken) in the bottom left corner, Holy Cross Church in the middle, the bay (Vågen) with its many boats and the Bergenhus Fortress to the right of the opening of Vågen.

In 1349, the Black Death was brought to Norway by an English ship arriving in Bergen.[14] Later outbreaks occurred in 1618, 1629 and 1637, on each occasion taking about 3,000 lives.[15] In the 15th century, the city was attacked several times by the Victual Brothers,[16] and in 1429 they succeeded in burning the royal castle and much of the city. In 1665, the city’s harbour was the site of the Battle of Vågen, when an English naval flotilla attacked a Dutch merchant and treasure fleet supported by the city’s garrison. Accidental fires sometimes got out of control, and one in 1702 reduced most of the town to ashes.

Throughout the 15th and 16th centuries, Bergen remained one of the largest cities in Scandinavia, and it was Norway’s biggest city until the 1830s,[17] when the capital city of Oslo became the largest. From around 1600, the Hanseatic dominance of the city’s trade gradually declined in favour of Norwegian merchants (often of Hanseatic ancestry), and in the 1750s, the Hanseatic Kontor[clarification needed] finally closed. Bergen retained its monopoly of trade with northern Norway until 1789.[18] The Bergen stock exchange, the Bergen børs, was established in 1813.

During World War II, Bergen was occupied on the first day of the German invasion on 9 April 1940, after a brief fight between German ships and the Norwegian coastal artillery. The Norwegian resistance movement groups in Bergen were Saborg, Milorg, “Theta-gruppen“, Sivorg, Stein-organisasjonen and the Communist Party.[21] On 20 April 1944, during the German occupation, the Dutch cargo ship Voorbode anchored off the Bergenhus Fortress, loaded with over 120 tons of explosives, and blew up, killing at least 150 people and damaging historic buildings. The city was subject to some Allied bombing raids, aimed at German naval installations in the harbour. Some of these caused Norwegian civilian casualties numbering about 100.

Bergen is also well known in Norway for the Isdal Woman (Norwegian: Isdalskvinnen), an unidentified person who was found dead at Isdalen (“Ice Valley”) on 29 November 1970.[22] The unsolved case encouraged international speculation over the years and it remains one of the most profound mysteries in recent Norwegian history.[23][24]

The rural municipalities of Arna, Fana, Laksevåg, and Åsane were merged with Bergen on 1 January 1972. The city lost its status as a separate county on the same date,[25] and Bergen is now a municipality, in the county of Vestland.

The city’s history is marked by numerous great fires. In 1198, the Bagler faction set fire to the city in connection with a battle against the Birkebeiner faction during the civil war. In 1248, Holmen and Sverresborg burned, and 11 churches were destroyed. In 1413 another fire struck the city, and 14 churches were destroyed. In 1428 the city was plundered by the Victual Brothers, and in 1455, Hanseatic merchants were responsible for burning down Munkeliv Abbey. In 1476, Bryggen burned down in a fire started by a drunk trader. In 1582, another fire hit the city centre and Strandsiden. In 1675, 105 buildings burned down in Øvregaten. In 1686 another great fire hit Strandsiden, destroying 231 city blocks and 218 boathouses. The greatest fire in history was in 1702, when 90% of the city was burned to ashes. In 1751, there was a great fire at Vågsbunnen. In 1756, yet another fire at Strandsiden burned down 1,500 buildings, and further great fires hit Strandsiden in 1771 and 1901. In 1916, 300 buildings burned down in the city centre including the Swan pharmacy, the oldest pharmacy in Norway, and in 1955 parts of Bryggen burned down.

listen) (in the local dialect [ˈbæ̂ʁɡɛn]). The Old Norse forms of the name were Bergvin [ˈberɡˌwin] and Bjǫrgvin [ˈbjɔrɡˌwin] (and in Icelandic and Faroese the city is still called Björgvin). The first element is berg (n.) or bjǫrg (n.), which translates as ‘mountain(s)’. The last element is vin (f.), which means a new settlement where there used to be a pasture or meadow. The full meaning is then “the meadow among the mountains”.[26] This is a suitable name: Bergen is often called “the city among the seven mountains”. It was the playwright Ludvig Holberg who felt so inspired by the seven hills of Rome, that he decided that his home town must be blessed with a corresponding seven mountains – and locals still argue which seven they are.

In 1918, there was a campaign to reintroduce the Norse form Bjørgvin as the name of the city. This was turned down – but as a compromise, the name of the diocese was changed to Bjørgvin bispedømme.[27] 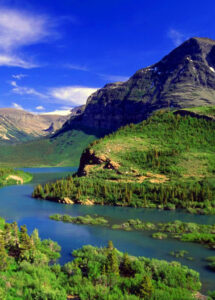 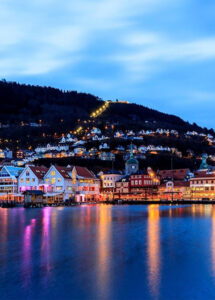 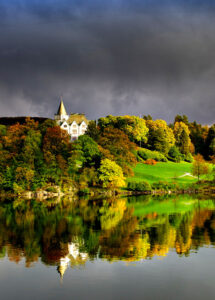 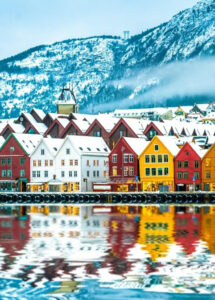