Bergens Tidende (BT) and Bergensavisen (BA) are the largest newspapers, with circulations of 87,076 and 30,719 in 2006,[136] BT is a regional newspaper covering all of Vestland, while BA focuses on metropolitan Bergen. Other newspapers published in Bergen include the Christian national Dagen, with a circulation of 8.936,[136] and TradeWinds, an international shipping newspaper. Local newspapers are Fanaposten for Fana, Sydvesten for Laksevåg and Fyllingsdalen and Bygdanytt for Arna and the neighbouring municipality Osterøy.[136] TV 2, Norway’s largest private television company, is based in Bergen.

The 1,500-seat Grieg Hall is the city’s main cultural venue,[137] and home of the Bergen Philharmonic Orchestra, founded in 1765,[138] and the Bergen Woodwind Quintet. The city also features Carte Blanche, the Norwegian national company of contemporary dance. The annual Bergen International Festival is the main cultural festival, which is supplemented by the Bergen International Film Festival. Two internationally renowned composers from Bergen are Edvard Grieg and Ole Bull. Grieg’s home, Troldhaugen, has been converted to a museum. During the 1990s and early 2000s, Bergen produced a series of successful pop, rock and black metal artists,[139] collectively known as the Bergen Wave.[140][141]

Den Nationale Scene is Bergen’s main theatre. Founded in 1850, it had Henrik Ibsen as one of its first in-house playwrights and art directors. Bergen’s contemporary art scene is centred on BIT Teatergarasjen, Bergen Kunsthall, United Sardines Factory (USF) and Bergen Center for Electronic Arts (BEK). Bergen was a European Capital of Culture in 2000.[142] Buekorps is a unique feature of Bergen culture, consisting of boys aged from 7 to 21 parading with imitation weapons and snare drums.[143][144] The city’s Hanseatic heritage is documented in the Hanseatic Museum located at Bryggen.[145]

SK Brann is Bergen’s premier football team; founded in 1908, they have played in the (men’s) Norwegian Premier League for all but seven years since 1963 and consecutively, except one season after relegation in 2014, since 1987. The team were the football champions in 1961–1962, 1963, and 2007,[146] and reached the quarter-finals of the Cup Winners’ Cup in 1996–1997. Brann play their home games at the 17,824-seat Brann Stadion.[147] FK Fyllingsdalen is the city’s second-best team, playing in the Second Division at Varden Amfi. Its predecessor, Fyllingen, played in the Norwegian Premier League in 1990, 1991 and 1993. Arna-Bjørnar and Sandviken play in the Women’s Premier League.

Bergensk is the native dialect of Bergen. It was strongly influenced by Low German-speaking merchants from the mid-14th to mid-18th centuries. During the Dano-Norwegian period from 1536 to 1814, Bergen was more influenced by Danish than other areas of Norway. The Danish influence removed the female grammatical gender in the 16th century, making Bergensk one of very few Norwegian dialects with only two instead of three grammatical genders. The Rs are uvular trills, as in French, which probably spread to Bergen some time in the 18th century, overtaking the alveolar trill in the time span of two to three generations. Owing to an improved literacy rate, Bergensk was influenced by riksmål and bokmål in the 19th and 20th centuries. This led to large parts of the German-inspired vocabulary disappearing and pronunciations shifting slightly towards East Norwegian.[148]

The 1986 edition of the Eurovision Song Contest took place in Bergen. Bergen was the host city for the 2017 UCI Road World Championships. The city is also a member of the UNESCO Creative Cities Network in the category of gastronomy since 2015.[149] 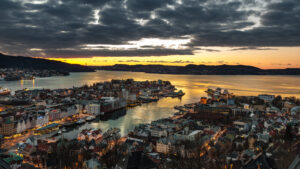